Home › Church/Ecclesiology › Fear, Faith, and Nationalism in the Era of Terrorism – Part 2

Fear, Faith, and Nationalism in the Era of Terrorism – Part 2

Jonah and the Whale, painting by Pieter Lastman

In my last post, I made a case for the impossibility of holding dual citizenship in both the kingdom of God and any earthly empire. We must choose which one we will identify with fully. In this post, I want to unpack that concept further through the story of Jonah.

Although God formed the nation of Israel, his intent has always been to bless all the nations of the earth through her. [1] At times, this idea was difficult even for his prophets.

Take Jonah, for example.  Jonah is understood by most of us to be a reluctant prophet, but we should recognize that much of his reluctance stems from the fact that he is an Israeli nationalist. When God instructs him to prophesy to Israel’s sworn enemies in the Assyrian capital of Nineveh (near modern-day Mosul in northern Iraq), Jonah bolts. When he does, though, instead of sending another messenger, God goes to great lengths to retrieve him. God seems as interested in liberating Jonah from his hard-hearted tribal mindset as He is in seeing the people of Nineveh repent.

After the unpleasantness of a near-death experience and being cooped up in a slimy fish belly for 3 days, Jonah reluctantly agrees to go to Nineveh. He delivers God’s message in the most unembellished way possible: “Forty days, and Nineveh will be overthrown.” To his chagrin, the people repent en masse and receive God’s mercy. Jonah is livid. His hatred toward the people of Nineveh is on full display by the end of the story. The Ninevites have committed atrocities against the people of Israel, and Jonah prefers to see them judged and destroyed. He can’t see beyond the injustices they’ve committed. God, however, sees both the children in the city and the future generations that He wants to spare. He invites Jonah to see them too. One of the amazing outcomes of God’s having spared the Ninevites thousands of years ago is that some of their descendants in northern Iraq today have come to know Christ. Iraqi Christians are keenly aware of their direct connection to this story. 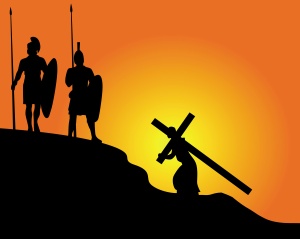 To see as God sees requires us to follow Jesus’ footsteps to Calvary. It’s a path of tribulation that leads to a place of death. We have to take up our cross, whether it’s our fear, our dread, our hatred, our idolatrous nationalism, or our need for security, and surrender it all at Golgotha. Only after we have died to the profane or earth-bound things we hold dear can we be raised up and liberated to live a life in which fear, dread, and death have no dominion over us. [2]

The ten Booms, a devout Dutch Reformed family, understood this dimension of their faith when the Nazis took over the Netherlands. They saw the threat of the Nazi empire from a distance long before it arrived, and they prepared themselves not by gearing up for war, but by readying themselves spiritually for service to their heavenly king. When the time came, at great personal risk, they sheltered and smuggled Jewish refugees to safety. Their underground network saved an estimated 800 Jews. The family was eventually betrayed, arrested, and sent to concentration camps, and only Corrie survived [3]

As horrifying as it is to think about, God’s people around the world are sometimes called upon to suffer oppression, persecution, and martyrdom at the hands of atheistic and terroristic regimes. Until Jesus returns, empires will continue to rise and fall, and heavenly citizens will continue to get caught up in the matrix of conflict. Christians in America should not think we have been granted a special divine dispensation against this possibility. We pray for our earthly government to exercise its protective power and authority justly on our behalf, since it wields the power of the sword.[4] But we must be about our Father’s business.

Like Loading...
‹ Fear, Faith, and Nationalism in the Era of Terrorism – Part 1
We Are Robert Lewis Dear: How This Terrorist Exposes Who We Are ›