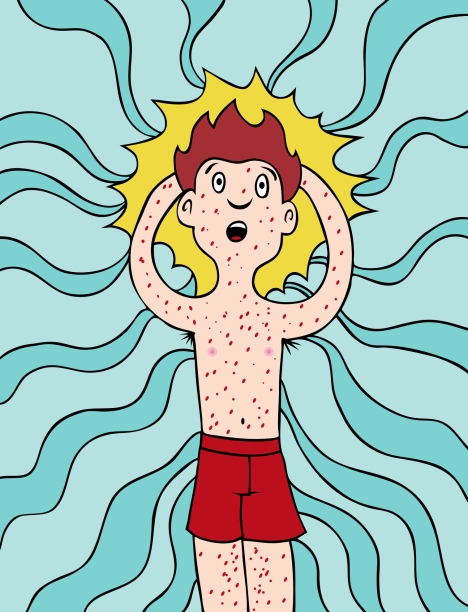 When people start talking about race and racism, do you experience a range of negative emotions, an elevation in blood pressure, increased heart rate, sweaty palms, heartburn, chest tightness, or a knot in the pit of your stomach? If so, you may be suffering from Racial Discourse Allergy, or RDA. You break out in hives on the inside.

In the interest of finding an alternative to complete avoidance (unless you actually have an anaphylactic type reaction to these conversations), I would like to propose a treatment plan. Let’s take a break from our own trigger-filled context and practice talking about the role of race and racism in the context of biblical history instead. We’ll zoom in on 2 places in the Bible that portray interactions between different people groups and study their interracial dynamics. The goal of this approach is to provide us with a broader, more objective framework to help us manage and perhaps circumvent the RDA response in our own context.

The story of how the Israelites end up in Egypt is detailed in Genesis 39-50. It begins with Joseph’s arrival there as a slave. Thirteen years later, he becomes Pharaoh’s right-hand man; and eight or so years after that, all of his family members arrive from Canaan as famine refugees. Pharaoh allows them to settle in northern Egypt. There, they grow into an exceedingly numerous people group that fills the land. (Exod. 1:7)

During this period of Israelite settlement and growth, Egypt is ruled by Hyksos pharaohs.(The Hyksos are a Semitic-Asiatic people group who invaded and conquered Egypt in the 17th century BCE and established dynastic rule.) However, an Egyptian nationalistic movement eventually precipitates a war of independence that results in the Hyksos’ being overthrown and expelled. A violent regime change, rather than a dynastic succession, is the context for Exodus 1:8, which says that a new king who does not know about Joseph has risen to power. The Israelites’ favored and protected status ends. They are now looked upon with suspicion, as potential enemies of the state.i, 1-4

As part of his effort to “deal shrewdly with them,” (Exod. 1:9) the new king resorts to xenophobic scapegoating of the Israelites, followed by systematic enslavement. He also implements a racist population control policy: infanticide of Hebrew boys.

We now enter the world of the first century church. The Hellenistic Jews are Greek-speaking Jews who have immigrated to Judea and Galilee from other parts of the world once ruled by Alexander the Great, including Africa, Southeastern Europe, and the Middle East. The Hebraic Jews, who are Aramaic-speaking natives of Judea and Jerusalem, look down on the immigrants as being culturally, linguistically, and religiously compromised.

Because of the language barrier and the hostility of the culturally dominant Hebraic Jews, the Hellenistic Jews worship in separate Greek-speaking synagogues.5 It should be noted that the language barrier is largely unidirectional.  Most of the Hebraic Jews in this time period speak at least some Greek, since it’s the official language of commerce in the Roman Empire.6,7 So they could find ways to enfold the Hellenistic Jews into their corporate worship life if they had the will to do so; but they do not.

Even as people from both groups come to Christ, this thread of Hebraic supremacy remains. In Acts 6, we see that it’s significant enough to result in marginalization and neglect of the Hellenistic widows in the Jerusalem church’s daily distribution of food to its poor widows. The church apostles, who are all native Galileans and Judeans, are out of touch with the needs of the church’s immigrant minority until an organized Hellenist advocacy effort brings this matter of racialized disparity to their attention. Fortunately, the church leaders take the complaint seriously and address it by having the Hellenistic members choose 7 of their own men to oversee the distribution of their widows’ food.

Nothing New Under the Sun: Lessons from the Ancient World

From these 2 biblical portraits, we can make 5 observations about race and racism:

Table 1.  Dominant/Non-dominant Matrix for People Groups in the the 2 Biblical Portraits

2.  Political uncertainty (threats to power and stability), economic uncertainty (scarcity), and bloody conflict (threats to physical safety) tend to provoke xenophobia, or “fear and hatred of strangers, foreigners, or of anything that is strange or foreign,”10 and all forms of bigotry (racial, ethnic, religious, political).

3.  Even when there is no active oppression taking place, dominant groups are often unaware of and insensitive to the particular struggles of non-dominant groups.

4.  Even in the church, God’s people are heavily influenced by broader cultural forces that are ungodly. Cultural supremacy and racial bigotry became a fully embedded and structural reality of the Hebraic Jews’ faith and way of life.

Interracial conflict has existed since the beginning of human history. It has created turmoil and division in every civilization, without exceptions. So understanding the dynamics of race and racism in our very own society, understanding where we fit into the dominant/non-dominant matrix of our time and place, and being aware of how those things influence our thought processes and perspectives, are vital aspects of our human development and Christian discipleship. Competency in these areas is what enables us to relate lovingly and effectively to people of all tongues, tribes, and nations for the sake of the gospel. (1 Cor. 9:22)

Here are some questions to stimulate more thinking on the subject. Work through these with a friend and talk about your answers.

i. The details provided here are disputed by scholars, but the primary point remains: that a change in regime precipitates the oppression of the Israelites.

Like Loading...
‹ ‘Twas the Week Before Christmas – A Mother’s Tale
How Talking to Your Kids About Race Helps To Fulfill the Great Commission ›