Understanding the Racial Empathy Gap: The Power of Narratives (Part 1)

Today’s post is Part 1 of a 5-part series exploring the black-white racial empathy gap in the United States.

Narratives – the specific ways that stories are told, retold, and infused with unique beliefs and perspectives – are invisible, yet their effects are not. They exert a powerful influence over our understanding and interpretation of our selves and the world around us. They shape our allegiances, sympathies, values, sensibilities, convictions, and passions, and therefore, the unspoken social contracts that we maintain with one another. But as we know, there are competing narratives. Some are predominant, some strive for predominance, and others clamor for basic acknowledgement.

The trouble with competing narratives isn’t that they exist; it’s what we do with them and the people associated with them. Throughout human history, our most common response to people groups we don’t understand or agree with has been to dismiss, invalidate, or suppress their narratives, often through a combination of rhetorical and physical violence. One of the most obvious examples of this phenomenon in the United States is the vitriol that is passed back and forth between blacks and whites whenever there is a racially charged incident that makes it onto the national stage: the killing of Trayvon Martin in 2013 by a neighborhood watchman who may or may not have profiled him, the shooting death of Michael Brown by a white Ferguson PD police officer in 2014, the video that surfaced a couple of days ago of SAE pledges/members at OU happily singing a song using the n-word and making references to lynching. The inability of people in one ethnic group to understand the feelings of, identify with the perspective of, or to perceive the pain of people in the other ethnic group becomes a prominent characteristic in much of the public discourse. Blacks feel invalidated, hurt, misunderstood, and dismissed. Whites feel hurt, misinterpreted, unjustly accused, and judged. I’m painting with a broad brush here, of course. Both groups are far from monolithic. Still, there is without a doubt a serious racial empathy gap between blacks and whites in our country. [1-3]

It’s not that either of these groups inherently lacks empathy. Both blacks and whites have tremendous capacity for empathy and compassion. They are, after all, human. What creates a problem between them is that for each group, as with every group that has a distinct ethnic and/or cultural identity, the empathy is highly contextualized to the framework that its unique narratives create. In other words, people are conditioned to feel empathy in certain contexts and under certain conditions but not others. Take a look at the following illustration, which consists of 2 images, each one associated with a specific narrative. Try to assess how each one affects you differently. 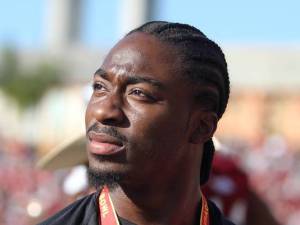 This is Marcus. He’s 23 years old. Because he is black, he is more likely to be perceived as dangerous, to be arrested, to be convicted of a crime, to receive a harsh sentence if convicted, and to be killed by a police officer than his white counterparts, even after factoring in major variables. [4-8] He knows that if he ever has to interact with a police officer, he needs to keep his hands in plain view, make no sudden movements, be polite and cordial, never argue, never fight back, never run, and never answer questions if the answers are potentially self-incriminating. And it goes beyond having respect for authority; it’s about increasing his chances of survival. [5] Because he is black, he can also expect to have a harder time finding employment and to be paid less than his white counterparts who do the same types of jobs, even after taking key variables into consideration. [9]

Marcus Lattimore, beloved former running back for the University of South Carolina, is pictured here being helped off the field after sustaining a devastating right knee injury on October 27, 2012. He had just managed to recover from a serious left knee injury sustained one year prior. The writer who reported on the 2012 injury in Fits News wrote, “While a catastrophic injury like this is terrible no matter who suffers it, Lattimore’s injury seems especially unfair given what a class act he’s been ever since arriving on campus three years ago. Throughout his record-breaking career at USC Lattimore has been a soft-spoken leader on the field and a humble, straight-laced student off of it.” [11] He has been described as both a consummate team player and a humble role model. [12] He rehabilitated sufficiently in time to enter the 2013 NFL draft and was drafted by the San Francisco 49ers in October 2013. Unfortunately, the physical demands of the NFL proved to be too much for his damaged right knee. This past November, he announced his retirement from the NFL, as well as plans to return to USC to finish his degree.

Did you feel a difference in your empathy meter between narratives? What do you think is going on?

The first narrative is a societal-level narrative constructed from psychological and social science research. The second narrative is an individual-level narrative constructed from portions of Marcus’s life story. The two narratives do not represent two different people. They simply describe the same person in two different ways and through two different lenses. The difference is that while the second narrative probably evokes empathy in blacks and whites alike, the first is considerably less likely to evoke empathy among whites. In fact, it may actually have the opposite effect in some, triggering irritation and even anger. Why is that?

This is where competing narratives come into play.

In general, whites have no problem feeling compassion for an individual of any ethnicity or class if they are given a story to which they can personally relate. That’s why so many of them love and follow Brandon Stanton’s Humans of New York photography blog. But when they are asked or required to redirect their empathy from a single individual to an entire demographic group, namely young black men, several challenges arise. One of them is that doing so goes against a deeply held cultural belief that all merit, even empathy, is meant to be deserved and delivered at the level of the individual. Most (not all) whites genuinely believe that the United States operates as a meritocracy, which means that if you do the right things (work hard, make good choices), you will be rewarded; and if you do the wrong things (slack off, make poor choices), you will experience negative consequences. Since a significant portion of their personal experiences support this belief, they have little vision for the existence of factors beyond individual actions that may disprove it.

This partly explains why there is so much emphasis on personal responsibility from whites in discussions about police shootings of black men. Within this paradigm, police officers only shoot people who deserve to be shot, and it has nothing to do with ethnicity. Any attempt to link a police officer’s use of deadly force to the race of the deceased or injured is labeled “race baiting” because in their minds, the only plausible explanation for it is that the person who was shot did something to provoke it. The personal responsibility narrative is held up as the standard and is used to render the racial bias narrative invalid, even before the racial bias narrative, which is layered and complex and requires time to unpack, has been fully explored or given a proper hearing.

Let’s go back to the Marcus Lattimore illustration now and walk through how these competing narratives might continue to play out there. Those who reject the first narrative will likely attempt to use the second narrative as a means to refute, qualify, or explain away the realities that the first one is attempting to address. He’s a great guy. He’s soft-spoken and has great character. He wouldn’t have a problem with the police, and the police wouldn’t have a problem with him. The problem with that reasoning is that even though Marcus is indeed a likable and respectable guy, both the African-American experience and a large body of systematically collected data tell us that who he is as an individual makes very little difference for him when he is driving around town or walking down the street without his football jersey on, without his teammates around him, and without a holographic image of his ESPN bio floating over his head (i.e., when he is unrecognized and is only seen as a black man). The second narrative does not displace the first one. They coexist. A great example of this is that many black NYPD officers have reported experiencing racial profiling by fellow NYPD officers when off duty and out of uniform, resulting in unpleasant experiences like getting pulled over for no reason, having their heads slammed against their cars, getting stopped and frisked while shopping, getting thrown into prison vans, getting forced to the ground and handcuffed, and having guns brandished in their faces. [10]

I hope some of you are at least wondering now, if you haven’t wondered before and even if you’re still feeling skeptical, that if the disparities in police treatment, in the criminal justice system, employment, and wages that black men are experiencing can’t be explained solely by individual actions, character, or criminality, then what’s really going on? The answer to that question, as it turns out, is very complex and requires a walk down America’s memory lane. It also calls for a close examination of the fate of a several-hundred-year-old narrative about inherent black inferiority and criminality – one that was once used to justify ownership of and brutality toward black people in this country, even as late as the 1960s. I will address these things in Part 2.

Comment Policy: Please remember our common humanity – yours, mine, and everyone else’s – and keep your comments as kind as possible. If your comment is critical, please make it constructive. If it is rude, offensive, or abusive, it will be deleted. If you are a troll or are consistently negative or abusive, you will be banished to the phantom zone.